Recent ground-based and spacecraft surveys indicate that planets between the size of Earth and Neptune overwhelmingly dominate the population of exoplanets within our galaxy. Given that these planets are more difficult to observe and that we have no analogs for them within our own Solar System, the properties of this intermediate class of planets are poorly known.  We are left wondering what these "Neptune-class" and "Super-Earth" exoplanets are really like. Do they have solid surfaces, like Earth and the other Solar-System terrestrial planets, with atmospheres composed of CO2, N2, H2O, or something even more exotic? Are they fluid planets with thick, deep, hydrogen-rich atmospheres, like Uranus and Neptune? Are they "water worlds" with thick steam atmospheres overlying deep oceans? Transit and eclipse observations of Neptune-sized planets such as GJ 436b or Super-Earths like GJ 1214b are either ambiguous or downright confusing in terms of the atmospheric composition and bulk properties. SSI/CEPS researcher Julianne Moses uses chemical models to investigate the possible compositional diversity of Neptune-class exoplanets; in the process, she and her colleagues also specifically address the apparent methane-poor nature of GJ 436b, which is unexpected based on thermochemical-equilibrium arguments and the planet's predicted atmospheric temperature structure.
Similar to our own Uranus and Neptune, inefficient accretion of nebular gas during the early stages of planet formation is expected produce Neptune-class exoplanets whose mass is dominated by elements heavier than hydrogen and helium. The observed mass and radius of GJ 436b, in combination with interior models, suggest that the atmosphere of this exoplanet must contain some fraction of light gases like hydrogen and helium, but the overall atmospheric metallicity (i.e., fraction of elements heavier than hydrogen and helium), could be considerably greater than our own Sun or than more massive giant planets like Jupiter. Dr. Moses and her colleagues have explored the predicted equilibrium and disequilibrium chemistry of generic Neptune-class planets with metallicities varying from 1-10,000 times solar. They find that the expected composition and spectral properties of such exoplanets are strongly dependent on atmospheric metallicity. Figures 1 and 2 show some of these dependencies. 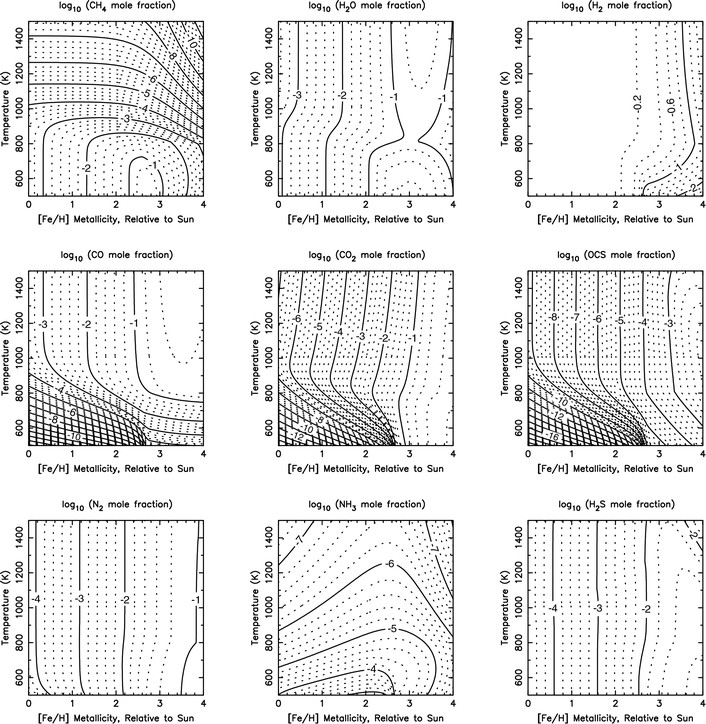 Figure 1.  Equilibrium mixing ratios for different atmospheric constituents as a function of temperature and metallicity for a typical "photospheric" pressure of 0.1 bar. The metallicity [Fe/H] is a logarithmic quantity here, such that [Fe/H] = 3 corresponds to a heavy-element enrichment of 1000 times solar. Figure is from Moses et al. (2013), Astrophys. J. 777, 34. 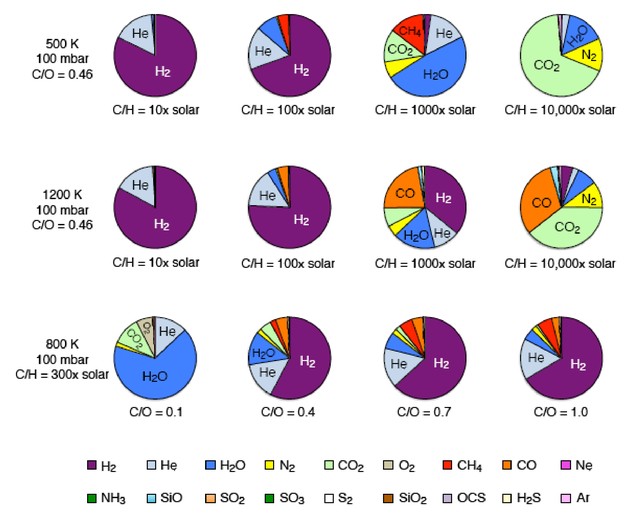 Figures 1 and 2 show how changes in temperature, metallicity, and C/O ratio can dramatically change the expected equilibrium composition of such planets.  For a Super-Earth or Neptune-class planet with a relatively low metallicity (e.g., < 100 times solar) and photospheric temperatures less than ~900 K, the atmospheric composition will resemble Neptune's, being dominated by H2 and He, with lesser amounts of water, methane, ammonia, and hydrogen sulfide.  At higher temperatures but low metallicities, much of the carbon will be in CO rather than methane, and because more of the oxygen is then tied up with the carbon, the water mixing ratio will be smaller than on cooler planets of the same metallicity.  As the metallicity is increased, molecules with two or more heavy elements (e.g., CO, N2) begin to be favored over their one-heavy-element counterparts (e.g., CH4, NH3), and molecules like CO2 that have three or more heavy elements become disproportionately favored. As the metallicity increases beyond ~1000 times solar, the total carbon and oxygen abundances begin to rival that of hydrogen, and the planets can have exotic atmospheric compositions that do not resemble anything we have in our own Solar System. At very high metallicities, carbon dioxide can become the dominant constituent, resulting in more Venus-like atmospheres on Neptune-class or Super-Earth exoplanets. Of course, the relative abundances of the heavy elements may not remain in solar proportions during the formation and evolution of the planet and its atmosphere, so this exercise of simply varying the metallicity may not be very realistic, but it does effectively illustrate the possible diversity of atmospheric compositions on smaller planets that never went through a phase of rapid runaway accretion of the nebular hydrogen-rich gas or on planets that experienced effective loss of hydrogen at their close orbital distances to their host stars.  Figure 2 also shows how the C/O ratio can affect composition -- at low C/O ratios, even molecular oxygen can become an important atmospheric constituent, emphasizing that O2 alone is not a good indicator of biological activity on exoplanets.

Figure 3. Dominant stability regimes in chemical equilibrium at 0.1 bar for gas-phase carbon species as a function of temperature and bulk C/O ratio for 300 times solar metallicity (left) and as a function of temperature and metallicity for a solar C/O ratio (right). Conditions where graphite is stable are shaded. Figure is from Moses et al. (2013), Astrophys. J. 777, 34, created by C. Visscher.

The carbon-bearing species are particularly sensitive to changes in bulk atmospheric properties.  Figure 3 shows the carbon phase diagram for an assumed photospheric pressure of 0.1 bar as a function of metallicity, temperature, and C/O ratio. Carbon dioxide is the dominant phase at very high metallicities or very low C/O ratios.  Methane dominates at low metallicities and low temperatures, whereas CO takes over at higher temperatures. Graphite can form and condense under certain regimes such as high-metallicity and low-temperature, making formation of clouds composed of graphite possible on these exoplanets. 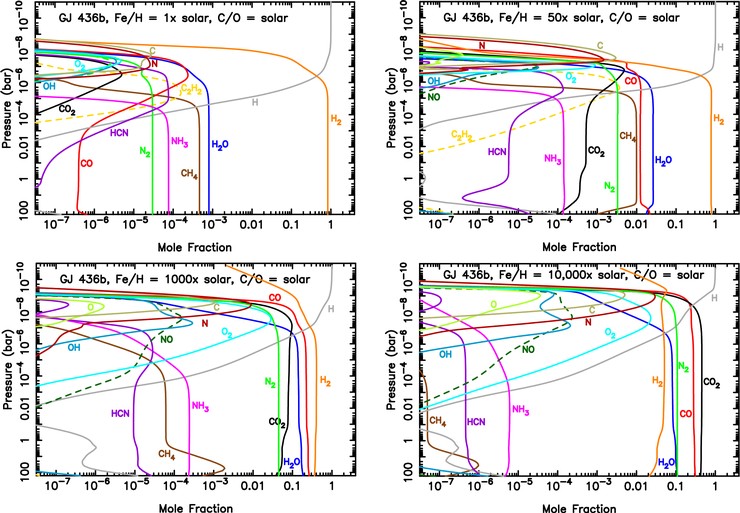 The Neptune-class planet GJ 436b is an odd case that does not fit well with the expectations based on these simple models.  At its derived distance from its M dwarf host star, atmospheric temperatures are expected to be cool enough that methane is the dominant atmospheric carbon constituent, yet Spitzer secondary eclipse observations suggest that the atmosphere is CO-rich and methane-poor.  However, a higher atmospheric metallicity will not only help favor CO over CH4, but the increase in molecular opacity sources at higher altitudes can help increase the temperatures, further increasing the CO/CH4 ratio. Figure 4 shows how the constituent abundance profiles for GJ 436b are expected to change as a function of metallicity.  Dr. Moses and her colleagues demonstrate that a disequilibrium-chemistry model with an assumed atmospheric metallicity of 300 times solar for GJ 436b provides a much better fit to Spitzer secondary eclipse data than a model that assumes a solar-like composition (Figure 5).  They conclude that GJ 436b is relatively hydrogen-poor, with a metallicity most likely in the ~200-2000x solar range. 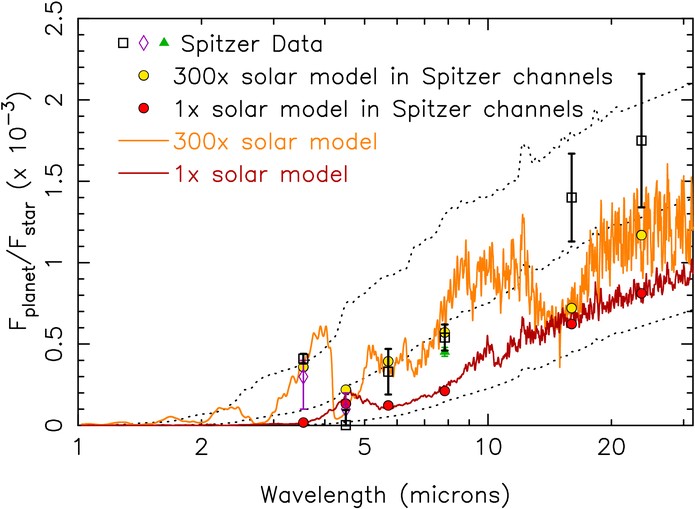 Figure 5. Synthetic emission spectra for GJ 436b for a disequilibrium model that assumes a 300x-solar-metallicity atmosphere (orange) and a 1x-solar-metallicity atmosphere (red), in comparison with Spitzer secondary-eclipse observations (data points with error bars). The gold (or red) circles represent the model fluxes for 300x solar (or 1x solar) averaged over the Spitzer bandpasses. The black dotted lines represent the planetary emission assuming GJ 436b radiates as a blackbody at a temperature of 500 K (lower curve), 800 K (middle curve), or 1100 K (upper curve). Figure is from Moses et al. (2013), Astrophys. J. 777, 34.

Most of the higher-metallicity atmospheres described here have no analogs from within our own solar system, but one can imagine that they exist within the exoplanet population.  One can even imagine a continuum of Neptune-class planets with atmospheres ranging from Neptune-like compositions to more Venus-like compositions, along with more exotic CO-dominated planets and H2O-dominated water worlds in between. Moses and colleagues end their study with the statement, "As the statistics regarding exoplanet properties continues to grow, so does our amazement at the diversity of these worlds beyond the narrow confines of our solar system."

Note: The discussion above was largely cannibalized, including occasional exact wording, from the following papers: