The rapidly growing statistics for basic extrasolar planet properties such as radius, mass, and orbital period reveal an amazing diversity of planetary properties beyond the narrow confines of our Solar System.  Most of these extrasolar planets ("exoplanets") are expected to possess atmospheres of some sort, but these atmospheres will have equally diverse, often unexpected properties.  We can learn something about what exoplanet atmospheres are like through observations of planetary transits and secondary eclipses -- mutual occultation events where the exoplanet passes in front of and behind its host star as seen from Earth (see Figure 1).  Such occultation events can only occur when the planetary orbits are edge-on as seen from the observer's perspective.  During a primary transit, the planet blocks some of the light coming from the star, causing a slight dip in the observed signal.  The amount of light lost during the transit provides information about the planetary radius.  The wavelength dependence of the transit signal provides information about the atmospheric composition because the stellar light passes through the planet's limb atmosphere on its way to the observer, and different atmospheric constituents absorb at different wavelengths.  During a secondary eclipse, the planet passes behind the star, and the planet's contribution to the total signal from the system is lost.  By subtracting the signal obtained during the eclipse (i.e., from the star alone) from the signal obtained just before the eclipse (i.e., from both star and planet), the emission from the planet can be isolated.  Again, the wavelength dependence of the planetary emission tells you something about atmospheric composition and temperatures.


Theoretical models are needed to interpret these observations, and that is where SSI/CEPS researcher Julianne Moses comes in.  Dr. Moses investigates how different chemical and physical processes combine to control and modify the atmospheric composition of exoplanets. To first order, the atmospheric composition can be predicted through the assumption of thermochemical equilibrium, which depends only on the bulk elemental composition and the temperature and pressure at any point within the atmosphere.  This assumption works best for very hot atmospheres at temperatures greater than ~2000 K.  For cooler atmospheres irradiated by external sources like their host star, disequilibrium chemical process like photochemistry and transport-induced quenching can play a significant role in influencing atmospheric properties.  Dr. Moses and her colleagues have developed a coupled thermochemical and photochemical kinetics and transport model to quantitatively investigate how disequilibrium chemistry affects the composition and observable spectral properties of extrasolar planets (Moses et al. 2011, Astrophys. J., 737, 15).

Figure 2 shows how some key carbon-, oxygen-, nitrogen-, and hydrogen-bearing species are affected by atmospheric temperatures and disequilibrium chemistry in the atmospheres of hydrogen-dominated extrasolar giant planets that orbit relatively close to their host stars.  The atmospheric temperatures get hotter going from top to bottom of the figure.  The left figures show the results when disequilibrium processes are ignored.  Water is an important constituent for the atmospheres at all three temperatures, but the main carbon constituent changes from CH4 for the cooler planet to CO on the hotter planets.  All three planets are warm enough that N2 is the dominant nitrogen constituent.  However, when disequilibrium processes are considered (Figure 2 on right side), other molecules are predicted to be present in potentially observable quantities, and the vertical profiles of the constituents change.  These changes will in turn affect the thermal structure, dynamics, and spectral properties of the atmosphere. 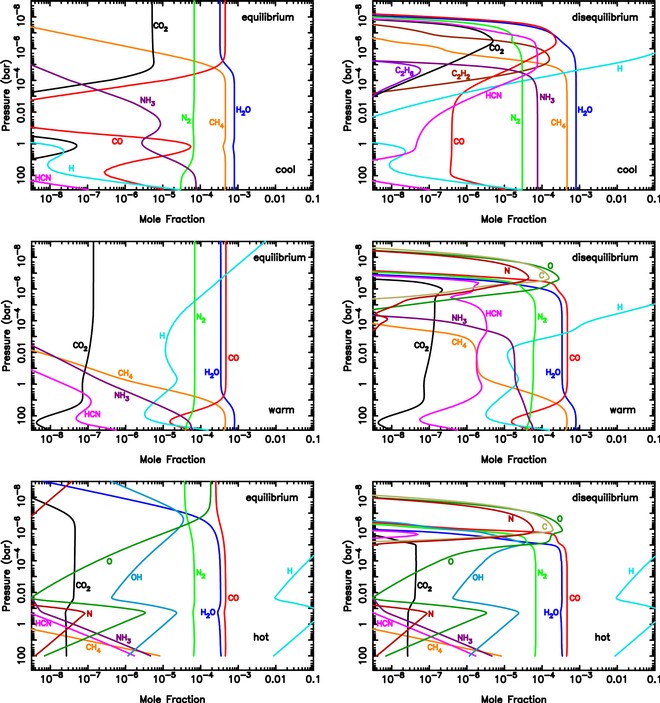 Dr. Moses and her colleagues find that photochemistry and transport-induced quenching can significantly alter the vertical profiles of the atmospheric constituents on transiting exoplanets.  Species with strong molecular bonds or that are efficiently recycled, such as H2O, CO, and N2, are less affected by photochemistry than species with weak bonds, such as CH4 and NH3. Transport-induced quenching tends to enhance the methane (CH4) and ammonia (NH3) abundances over their equilibrium values in the deeper regions of the observable atmosphere due to transport-induced quenching, but CH4 and NH3 are photochemically destroyed and converted to other species at higher altitudes. Disequilibrium chemistry also leads to an enhancement of atomic O, C, and N, some unsaturated hydrocarbons like acetylene (C2H2) and some nitriles like HCN.  The effects of disequilibrium chemistry on the expected spectra from the "warm" planet (modeled after HD 189733b) are shown in Figure 3.  The enhanced abundances of CH4, NH3, and HCN are, in particular, expected to affect primary transit and secondary eclipse spectra of extrasolar giant planets with equilibrium temperatures less than ~1100 K.  Potential disequilibrium species and their predicted distributions should therefore be considered in the analyses of transit and eclipse observations of extrasolar giant planets.  Dr. Moses and her colleagues discuss how comparison of these models with observations can help illuminate the underlying mechanisms that drive atmospheric behavior, can help provide critical feedback on the completeness of our understanding of exoplanet atmospheric chemistry, can help guide future observations and laboratory/theoretical work to best advance our knowledge of atmospheric behavior, and can provide clues as to how these planets formed and evolved.

Figure 3.  The effect of disequilibrium chemistry on synthetic spectra of the primary transit (left) and secondary eclipse (right) of HD 189733b.  The blue curves represent thermochemical-equilibrium model results, whereas the red curves are results from models that include thermochemical/photochemical kinetics and transport. Disequilibrium molecules responsible for absorption bands in the emission spectrum are labelled specifically. Figure credit: Moses (2014), Phil. Trans. R. Soc. A, 372, 20130073, adapted from models presented in Moses et al. (2011), Astrophys. J., 737, 15, with spectral calculations from J. J. Fortney (left figure) and C. A. Griffith (right figure).

Note: The discussion above was largely cannibalized, including occasional exact wording, from the following papers: