The Carbon/Oxygen Ratio in Exoplanet Atmospheres

When an extrasolar planet ("exoplanet") passes in front of and behind its host star as seen from the Earth, the resulting transit and eclipse observations can provide unprecedented insight into the planet's atmospheric composition.  Such observations to date have provided some interesting surprises. For instance, several close-in, hydrogen-rich, extrasolar giant planets -- commonly called "hot Jupiters" -- appear to exhibit a low abundance of atmospheric water in relation to carbon monoxide and/or methane, and some appear quite carbon-rich by solar standards [e.g., 1-5]. SSI/CEPS scientist Julianne Moses and her colleagues have pursued the idea that some of the exoplanets discovered to date have C/O ratios greater than the solar value of ~0.55. In particular, they have investigated the influence of the atmospheric C/O ratio on the chemistry, composition, and spectra of extrasolar giant planets [5] using a state-of-the-art thermochemical and photochemical kinetics, quenching, and transport model [6]. The results from these models indicate that the planetary atmospheric composition can change dramatically as a function of the C/O ratio (see Figure 1). Although carbon monoxide is expected to be a major constituent on warmer "hot Jupiters" for all C/O ratios, molecules like water and carbon dioxide are much more abundant when C/O < 1, whereas methane, acetylene, and hydrogen cyanide can become major constituents for C/O > 1. 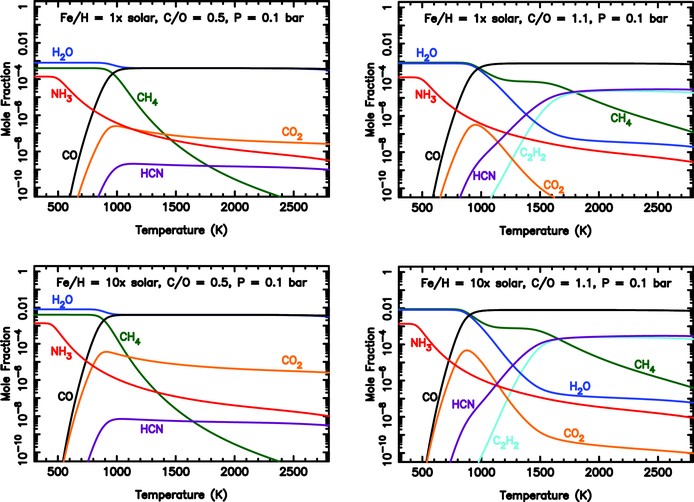 Figure 1.  Thermochemical equilibrium abundances of key spectrally active molecules in hydrogen-rich exoplanet atmospheres as a function of temperature at 0.1 bar, which is a typical pressure within the infrared "photospheres" of hot Jupiters, for a near-solar C/O ratio (left figures) versus a larger C/O ratio of 1.1 (right figures), for atmospheric metallicities of 1x solar (top figures) and 10x solar (bottom figures).  Note the dramatic decrease in the water abundance at high temperatures at high C/O ratios in comparison with low C/O ratios, and the increase in importance of CH4, HCN, and C2H2 at high temperatures for high C/O ratios in comparison with low C/O ratios. Figure from Moses et al. 2013, Astrophys. J., 763, 25.

Dr. Moses and her colleagues have compared the results of their models with secondary-eclipse photometric data from the Spitzer Space Telescope and conclude that disequilibrium models with C/O ~ 1 are consistent with observations of WASP-12b, XO-1b, and CoRoT-2b, confirming the possible carbon-rich nature of these planets. They also find that previously neglected molecules such as hydrogen cyanide can have a dominant influence on spectral behavior in the 3.6 and 8.0 μm Spitzer channels when C/O > 1, and that the very high carbon dioxide abundance inferred for HD 189733b from near-infrared Hubble Space Telescope observations [1-2,7-8] cannot be explained through equilibrium or disequilibrium chemistry in a hydrogen-dominated atmosphere.

Figure 2.  (Left) Vertical abundance profiles for several important species in a thermochemical and photochemical kinetics and transport model for the exoplanet XO-1b (solid lines) and for the assumption of thermochemical equilibrium (dotted lines).  (Right) Secondary-eclipse spectra for XO-1b from disequilibrium chemistry models that assume 1.5x solar metallicity and C/O ratios of either 1.05 (green) or 0.5 (purple). The blue circles with error bars represent the Spitzer IRAC observations [9]. The circles without error bars represent the model results for C/O = 1.05 (green) or C/O = 0.5 (purple) convolved over the Spitzer bandpasses. Note the much better fit to the data with the C/O = 1.05 model for this particular thermal structure and metallicity. The dashed lines are blackbody curves for assumed temperatures of 900 K (bottom), 1250 K (middle), and 1600 K (top). Figures reproduced from [5].

Figure 2 shows the mole-fraction profiles for several important atmospheric constituents in the Moses et al. [5] nominal thermochemical and photochemical kinetics and transport model for the exoplanet XO-1b. The dotted lines in the figure on the left show the expected thermochemical-equilibrium abundances, whereas the solid lines represent results from a disequilibrium kinetics and transport model. The overall messiness of this figure indicates that disequilibrium chemistry is important on XO-1b, particularly for species like water (H2O), hydrogen cyanide (HCN), acetylene (C2H2), and methane (CH4). The figure on the right shows a comparison of model synthetic spectra with the secondary-eclipse Spitzer data for XO-1b [9]. The carbon-rich (green) model provides a better fit to the data, particularly at 3.6 and 5.8 microns.

The host stars for WASP-12b, XO-1b, and CoRoT-2b appear to have nearly solar, or in some cases even subsolar, C/O ratios, suggesting that the disks in which these planets formed were not carbon-rich  How then can the exoplanets become carbon-rich? Vapor condensation within the protoplanetary disk is one possible mechanism for fractionating the carbon and oxygen, such that the solids and vapor end up with very different but complementary C/O ratios. Carbon-rich giant planets could have accreted water-ice-poor, carbon-rich solids during their migration through the disk regions inward of the snow line [e.g., 10-11], or they could get their carbon enrichment from the accretion of CO-rich, H2O-poor gas, either as they formed in the region between the water and CO condensation fronts in the outer disk [12], or in situ from the inner disk once their migration stopped very close to the host star [5]. Regardless of whether these specific scenarios are viable or not, Dr. Moses and her colleagues emphasize that the atmospheric C/O ratio and bulk metallicity of exoplanets provide important clues regarding the formation and evolution of giant planets within our own solar system and beyond, and it is hoped that future spectral observations can reveal how common carbon-rich giant planets are within the exoplanet population.

Note: The discussion above was largely cannibalized, including occasional exact wording, from the following paper: